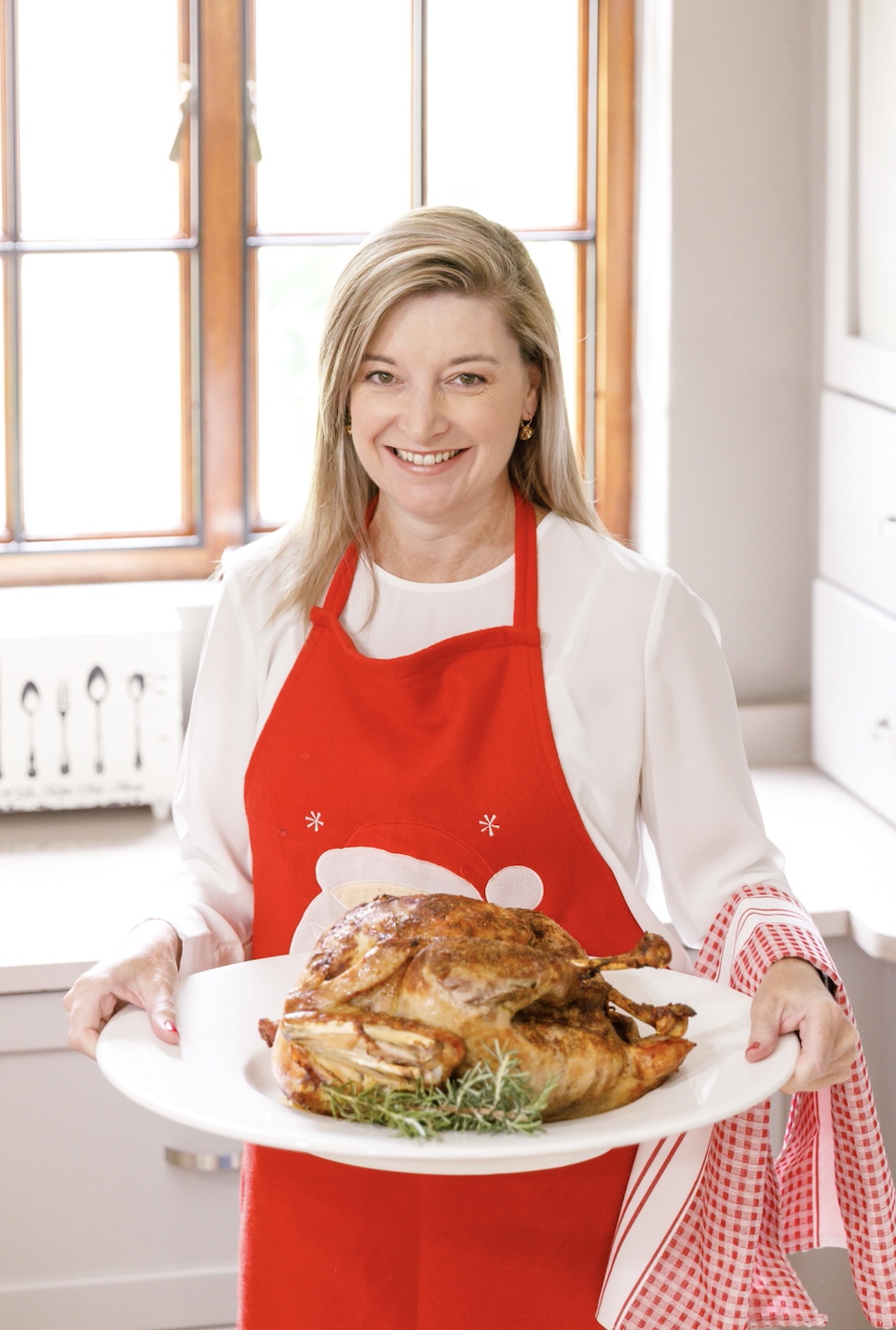 SA cookbook author and supermom, Jan shares some exciting recipes to cook for the festive season!

There are several ways to ensure you don’t serve up a dried out turkey on Christmas day and a large part of that is making sure you don’t dry out the white (turkey breast) meat. I do this in two ways, and the first step is to soak your turkey in a spicy brine bath, inspired by my Christmas guru, the fabulous Nigella Lawson.

For the brine bath:

How to do it

One day before you want to cook your turkey, place it in a large, clean tub and add the salt and spices. Cut the oranges in half, squeeze the juice over the turkey and then add the skins into the tub as well. Pour enough water over it so that the turkey is fully immersed, cover it and leave it to soak in a cool spot overnight.

Prepare the stuffing by removing the pork sausages from their casings. Place the meat in a mixing bowl and add the melted butter and stuffing mixture (which usually comes with instructions). Sometimes it calls for a bit of liquid, like stock or water to be added, and you can lighten the meat mixture and make it go further by adding a cup of cooked couscous. Remove the turkey from the water, drain it and pat it dry before stuffing the cavity of the turkey with the stuffing mix. Make incisions into the skin of the turkey just under the breast and gently pull the skin away, making a pocket that you can stuff butter into. This will prevent the turkey breast from drying out during cooking.

Prepare the roasting pan by layering a bed of vegetables and herbs. You can slice the chunky ones, like onions and leeks. Sprinkle with a bit of olive oil and lay the turkey, breast side down onto the greens. Baste the turkey with the goose fat and season with salt and spices – I like to use chicken seasoning. Cover your turkey with foil and cook at 160º allowing 45 minutes per kilogram. Halfway through the cooking time, turn the turkey over, and baste and season again. Now it’s time to crisp up the skin! When you have half an hour of cooking time left, remove the foil completely, baste the turkey with marmalade and turn the temperature up to 180º. Remove it when it’s beautifully crisped and golden, and you’ve completed the required cooking time. Leave it to rest before you carve and serve it with with a fruity sauce, like cranberry or cherry, and a delicious gravy of course! 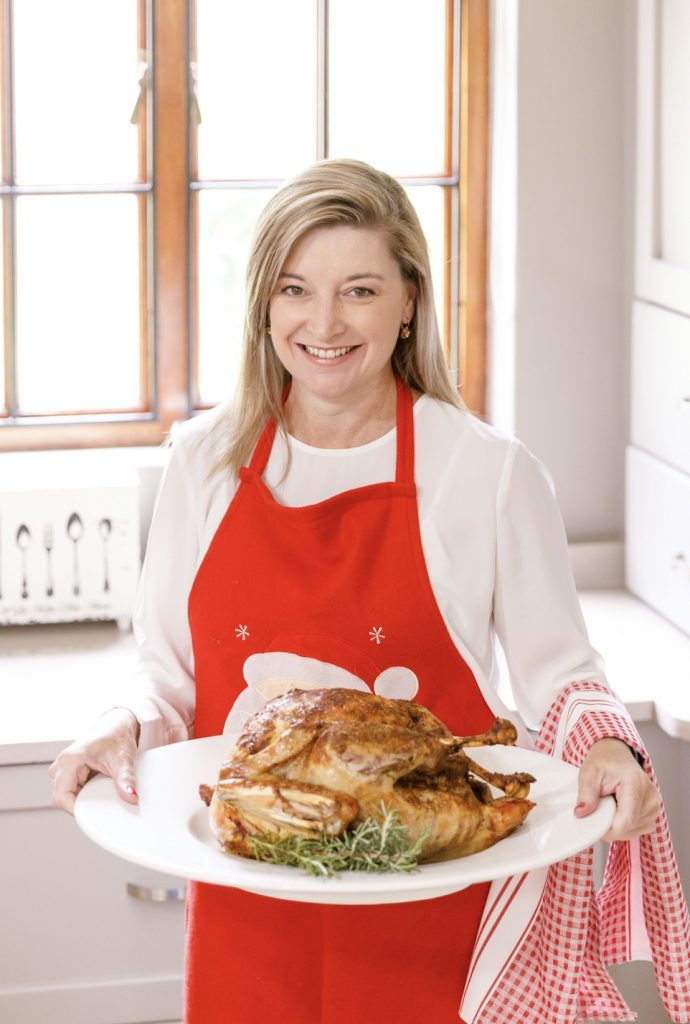 This is a spruced up version of a traditional apple pie, with a few added Christmas bells and whistles!

For the base and crust:

To make the filling core, peel and slice the apples. Place them in a saucepan together with the rest of the filling ingredients (except for the alcohol) and simmer for 5 to 10 minutes, until the fruit is tender and the sauce is thick and gooey. At the very end add the Cointreau and stir to combine. Remove the cloves and set this aside to cool.

Now make the pastry. Beat the softened butter and sugar together. Add the egg and continue mixing until light and fluffy. Add sifted dry ingredients to this mixture and combine to form a soft dough. Press half of the dough into a 23cm pie dish. Place the other half of the dough in the freezer so it hardens a bit. Spoon the pie filling onto the pastry and later, roughly grate the remainder of the pastry over the top. Sprinkle some flaked almonds over the top and bake in a pre-heated oven at 160°C for about 45 minutes, or until the tart is golden. Serve with ice-cream, cream and a dash of traditional brandy butter. 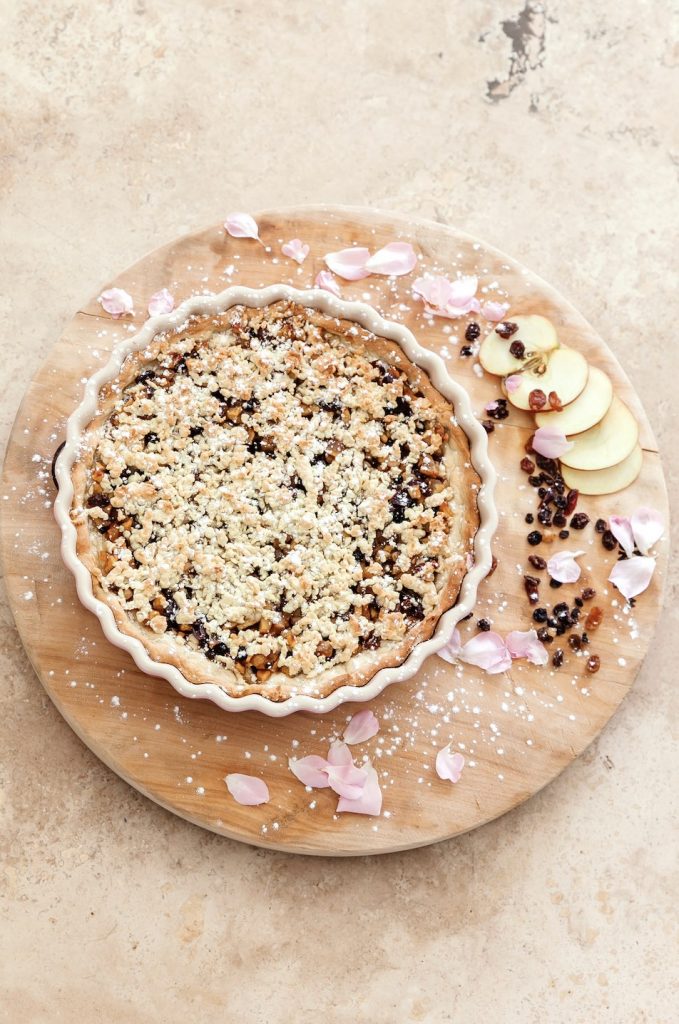 As we draw closer to Christmas Day, you might be thinking of things that you can prepare ahead. Desserts served in glasses look gorgeous and they take some of the admin out of your meal as you can do exactly that – prep ahead!

This is a fridge cheesecake with a Christmas pudding smashed into it. It’s a light fluffy dessert -much lighter than it sounds- with all the delicious flavours of Christmas.

Whip the cream using a hand-held electric beater in a small glass bowl. In a separate bowl, combine the condensed milk, cream cheese and lemon juice and mix well with a beater until this is smooth and creamy. Fold the whipped cream into the cream cheese mixture. Pour it into a flat dish and place in the fridge to set for at least 4 hours or overnight.

When you’re ready to assemble the dessert, break up a store-bought Christmas pudding with your hands and roughly stir these chunks into the cheesecake filling. Scoop the dessert into glasses, cover each one with cling film and pop them back into the refrigerator to chill until you’re ready to serve. Garnish with a few strawberries or cherries, and edible glitter for a bit of festive sparkle! 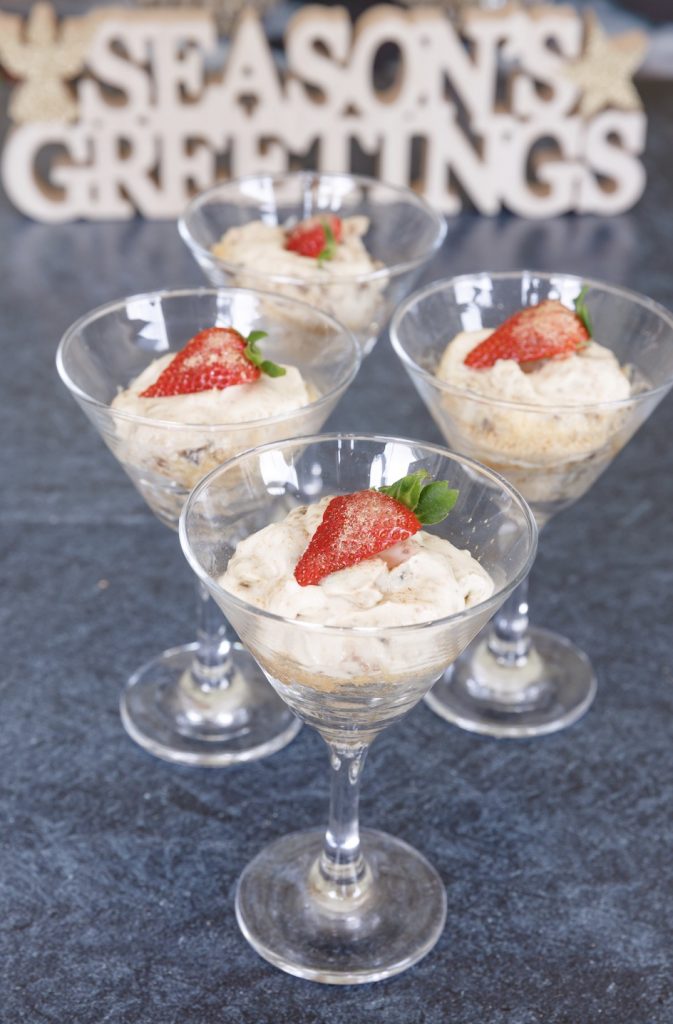 Wassail literally means to drink plentiful amounts of alcohol and enjoy oneself with others in a noisy lively way. Apt, I think, for Christmas time when we might find ourselves socializing in the kitchen over pots of delicious food, while knocking back a couple of yuletide cocktails.

Wassail is a deliciously spiced mulled white wine-apple drink. I first tasted it when visiting our American family friends over a very cold Christmas in Texas. I was captivated by the scents of citrus, cinnamon and clove, and I now make it every year, despite the South African heat, just to get our home smelling like Christmas. A pot of Wassail on the stove creates the perfect atmosphere to begin the festivities!

Combine all the ingredients and bring to a simmer on the stove. Serve warm glasses of Wassail and enjoy it with friends in a noisy, lively way! 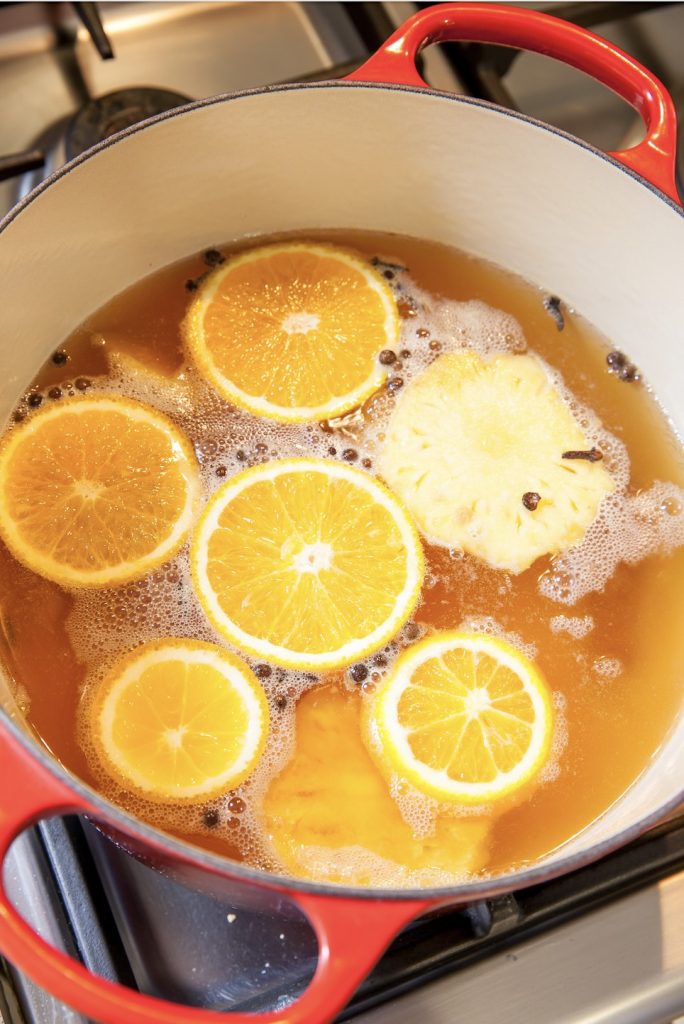